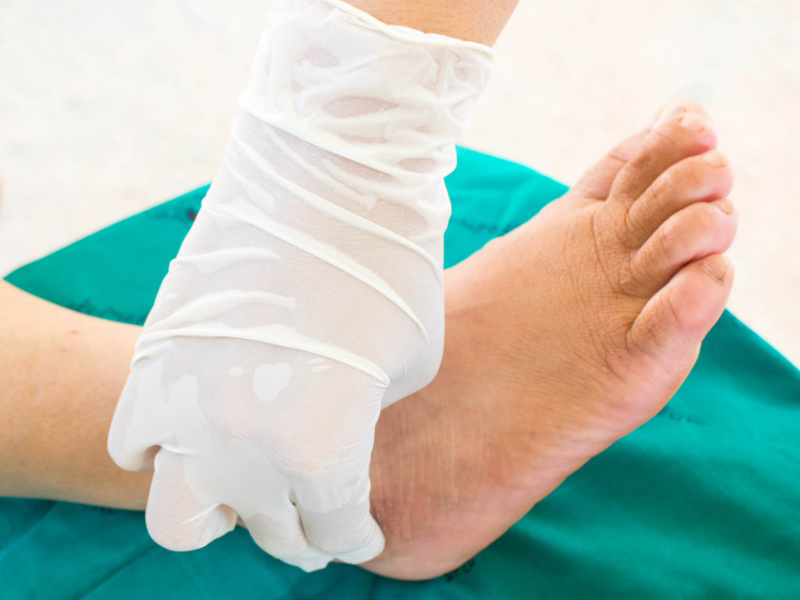 Peripheral vascular disease or arterial disease or peripheral ischemia of the lower limbs is a disorder in which the normal flow of blood to the tissues is blocked by material developed inside the lower limbs arteries. The arteries affected are the aorta, the iliac, the femoral, the popliteal and the tibia, all of which supply blood to the lower limbs; the atherosclerotic plaque formed on their walls block blood’s normal flow. This condition causes their narrowing or even blockage, as not sufficient oxygen and nutrients carried by the blood reach lower limbs. Atherosclerotic plaque (the material that clogs arteries) consists mainly of fat, platelets, calcium and fibrous tissue and is gradually developed in the arterial wall.

Which are the symptoms of peripheral vascular disease?
Peripheral vascular disease does not present any symptoms, especially in its early stages. Any discomfort in the lower limbs most of the times is not given the necessary attention, resulting in the late disease diagnosis. In the event of symptoms, these are:
1. Pain or cramp in the calves, thighs and hips, fatigue (intermittent claudication): these symptoms occur when walking and subside with rest
2. Severe pain in legs or toes even while resting
3. Sores or gangrene on toes and feet.

1. Stage I: Asymptomatic. At this stage the atherosclerotic lesions begin to develop slowly in the vessels, without any symptoms yet.
2. Stage II: Intermittent claudication. At this stage patients feel discomfort and pain in the lower limbs after exercising, usually after walking a certain distance. Ischemia varies among patients. Some of the symptoms are numbness, burning, heaviness and cramps.
3. Stage III: Ischemic rest pain. At this stage lower limbs are constantly numb with a strong burning sensation, pain and weakness. Main characteristic of this stage is that the symptoms do not subside even while resting and this is because tissues are not nourished properly, as blood circulation is weak.
4. Stage IV: Tissue loss – ischemic ulcers – gangrene. Peripheral vascular disease in this last stage includes necrotic lesions usually in the toes and parts of the body that are under pressure. Ischemia if left untreated can lead to amputation.

1. The most well-known and accurate test is the one that measures the amount of blood that reaches legs and is called ankle-brachial index . The procedure is as follows: with a blood pressure gauge and an ultrasound device (Doppler), which detects blood flow, blood pressure in the ankles and hand is measured. Then blood pressure of the upper and lower limbs is compared and the result of the division is the ankle-brachial index. Under normal circumstances, blood pressure in the ankles and arm is considered equivalent to a normal index of about 1.0. In peripheral vascular disease, blood pressure in the ankles is lower than that of the arm, resulting in the gradual reduction of the ankle-brachial index depending on the severity of the disease. In peripheral vascular disease the ankle-brachial index is less than 0.9. In more detail: mild disease has an index between 0.9 and 0.71, moderate between 0.7 and 0.51 and severe disease has an index less than 0.5
2. Triplex: triplex gives the doctor important information about whether there are obstructive lesions in the arteries and their hemodynamic significance, as it is a combination of ultrasound imaging with the analysis of blood flow.
3. CT and magnetic angiography: These two tests inform us of any obstructive damage to arteries throughout the arterial tree.
Finally, there is arteriography, which is performed preoperatively as it is an invasive method of diagnosis.

• In case of obesity, weight loss

• Glycemic control. HbA1c value should be <7% • Antiplatelet treatment with aspirin or clopidogrel • Lipid lowering • Daily exercise. The ideal is 30 to 60 minutes of walking every day. Walking boosts the development of collateral circulation and thus improves the symptoms of intermittent claudication. However, in some cases the invasive method is deemed necessary. For example, in cases of severe intermittent claudication, which despite appropriate medication and parameterization of risk factors was not treated, and in critical ischemia of the lower limbs, namely rest pain, ischemic ulcers or gangrene. The invasive treatment for peripheral vascular disease is either the percutaneous method with angioplasty and stent placement or the surgical method with bypass (bypassing the diseased arteries). In percutaneous angioplasty with stent placement, a special catheter is inserted into the lumen of the vessel through the skin. The stent is placed inside the vessel to support its walls and keep them open. In bypass, the affected part of the artery is bypassed by placing a synthetic or venous implant, placed at the back and the front of the blocked part of the artery. The technique that will be applied to each patient varies depending on the patient’s record, symptoms and the location and extent of the arterial lesions.